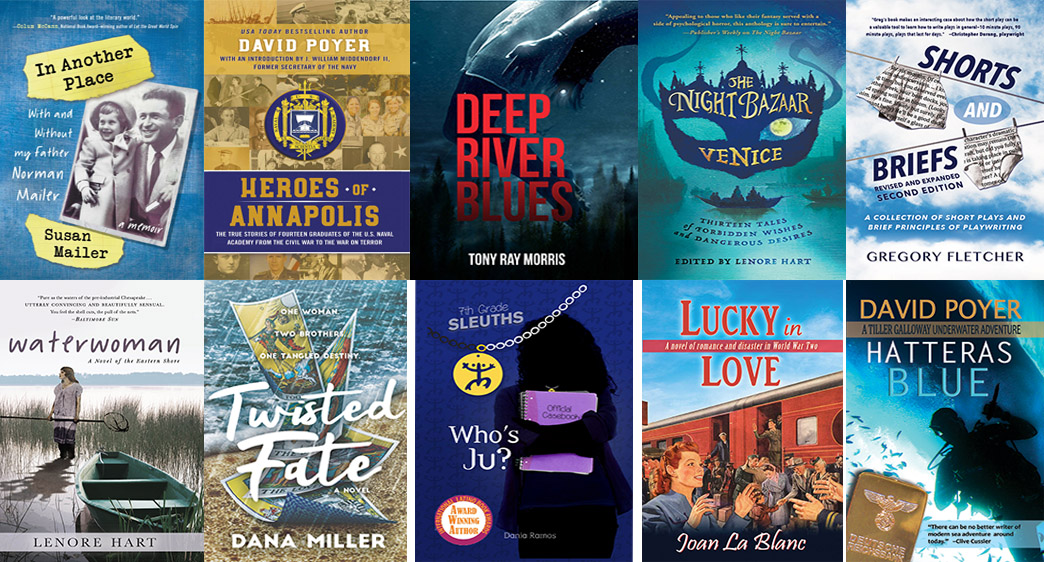 Some of our bestsellers and award winners are shown above. This online catalog describes our list by genre. Our ebook and audiobook editions are available from all major online outlets. Trade paper and hardcover editions may be ordered through any independent bookstore or online retailer.

Please follow us on Facebook — “Northampton House Press” — for the latest alerts about innovative works of high quality from brilliant new writers.

Our newest titles are shown below. But there are many more great books on our other pages. Happy reading!

Many Heads and Many Hands: James Madison’s Search for a More Perfect Union. New Paperback Edition!

““Those who care about the future of democracy will appreciate Mr. VanDuren’s vigorous and rigorous examination of the way Dutch and English influences worked from the European Middle Ages down through New England, New Amsterdam, and New York to the Federalist Papers and the American Constitution in the late 1780s.” — John C. Kemp, Plimoth Plantation.

Have you ever wondered why we practice separation of church and state? Have secular marriage and freedom of religion? Or enjoy democracy and the rule of law? And equality under the law? No taxation without representation? As Americans, we hold these concepts dear. Our republic was founded on them and we find them in our Constitution, of which James Madison was the main author.

From a cave in South Africa to the Roman Rhine, into Dark-Ages Paris, through the Burgundian lands to the marshes of Holland, and via the fields of England to the shores of America, this is a titanic story of scholars, pastors, princesses, and generals, and of common people too, striving over the centuries for security and freedom, and at last building a government that can promise them both, within the confines of a just law.

“Heroes of Annapolis is an inspiration from cover to cover.” – Quarterdeck Magazine

The United States Naval Academy has no monopoly on heroes. But over the last ten years, the most popular living author of American sea fiction has spent thousands of hours researching its graduates for Shipmate, the U.S. Naval Academy’s magazine. The extraordinary personal stories of adventure and courage he’s collected span American history from the Mexican War to the War on Terror.

HEROES OF ANNAPOLIS shines light into corners of history that still affect us today. Our huge prison population can be traced to Richmond P. Hobson, “The Most Kissed Man in America.”  Merian C. Cooper was a fighter pilot and director whose iconic KING KONG has been remade over and over. Philo McGiffin became a high-ranking officer in the Imperial Chinese Navy and surveyed many of the islands China is claiming today. Other graduates held bridges under fire, sacrificed their lives to save shipmates, shot down snipers with pistols, rescued fellow aviators on enemy territory, advised presidents against Vietnam, led Iraqi militias in Baghdad . . . and much more.

Poyer tries not to engage in hero worship. Still, for at least one shining moment, each of the men and women profiled made the difficult choice: To risk it all, for flag, country, honor, and those they led into battle.

MY UNEXPECTED LIFE  by Martina Clark 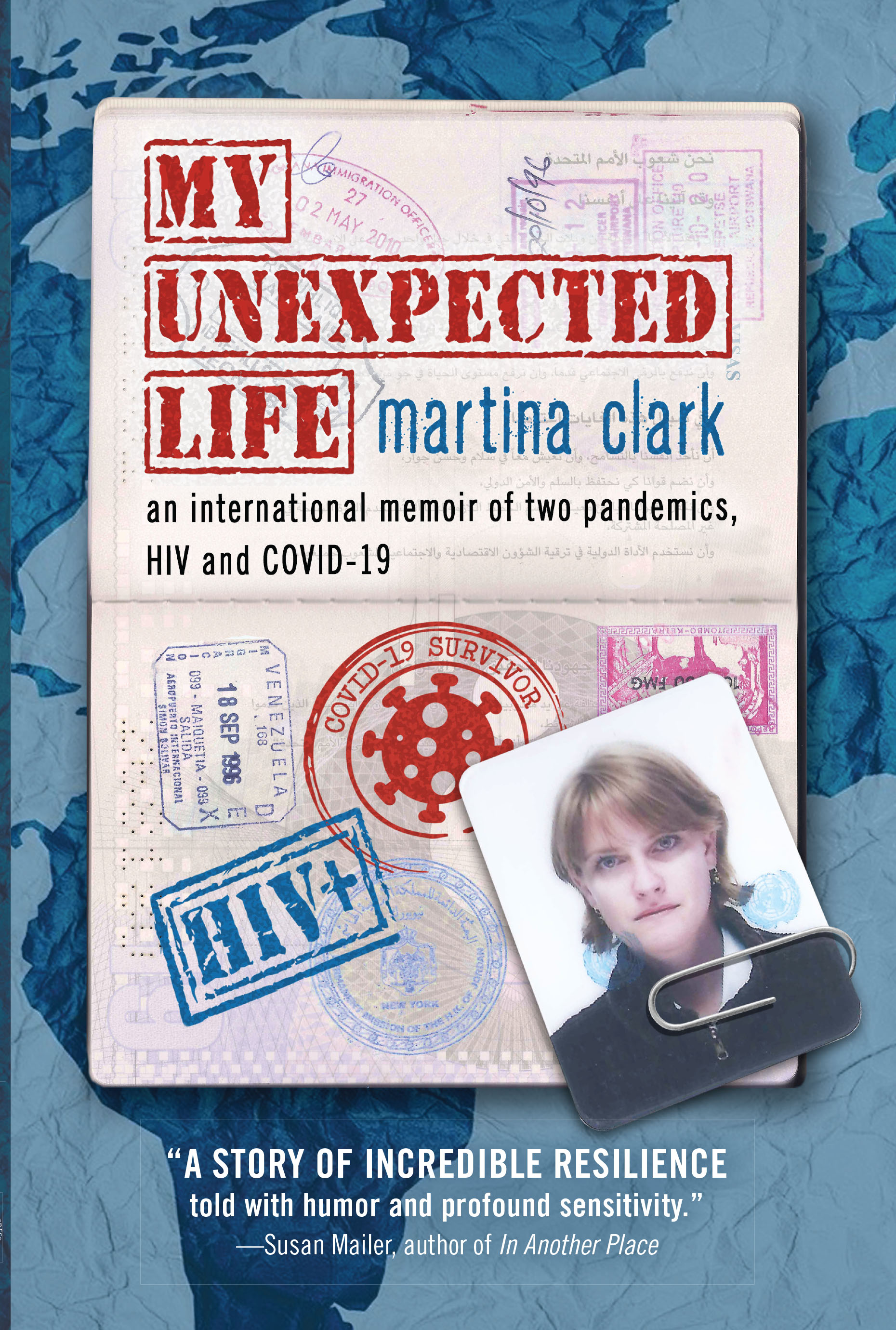 “I’ve read several HIV/AIDS-related memoirs over the years, but this is the first time I’ve ever seen an inside day-to-day account of an activist’s work –– with the UN, no less! It’s a terrific read.” –– Hank Trout, Senior Editor, A&U: America’s AIDS Magazine

“What’s not to like about a book that features a wooden penis and a silicone vagina?” – Patricia Marx, staff writer, THE NEW YORKER

At age 28, the doctors told Martina Clark she had HIV and five years to live.  With a sense of nothing to lose, she dove into activism. Then, fell into an international career, starting as the first openly HIV-positive person to work for UNAIDS in 1996. A mix of personal memoir, travel, humor and an up-close look at the squishy underbelly of the United Nations, My Unexpected Life follows her personal journey—emotional and physical—interwoven with her professional path. From diagnosis to starting treatment, surviving an abusive marriage and fostering a teenage daughter, Martina’s memoir adds an insider’s view to the history of the HIV/AIDS epidemic, particularly as pertains to women. Throughout, she draws parallels to the COVID pandemic–including her own long-haul bout with COVID–reflecting on her experiences as she journeys through life with an incurable illness, a well-stamped passport, and a stubborn determination that keeps her alive to bear witness to the human condition in My Unexpected Life.

“Jennifer Jenkins’s AMERICAN BOURBON is a compelling and potent family saga filled with evocative characters as strong and flinty as the Appalachia hills from whence they come, set against a smooth plot that goes down with an easy, supple, clean finish.” –Tony Ray Morris, author of DEEP RIVER BLUES

When an illegal moonshine still explodes deep in the Blue Ridge Mountains, the McKinsey family’s world-famous (and legal) whiskey, Bourbon Sweet Tea, is threatened. Government agents swarm the area, eager to implicate Sweet Tea founder Caleb McKinsey, who was a notorious bootlegger before going legit. Finding out he is dying, McKinsey’s ready to hand on his legacy. But none of his children are on speaking terms. His daughter Brigit is determined to remake the company against her father’s will, while his sons want nothing to do with their abusive father. When Caleb dangles a lucrative inheritance if all his children return, Brigit and her older brother Mack grudgingly call a truce to find missing brother Kieran. They journey to New York City, where Kieran fled after his girlfriend disappeared. As crimes from Caleb’s past promise to destroy Bourbon Sweet Tea, the only way to save their company is for Brigit to convince her brothers to embrace the family legends, and live as outlaws once again.

“Hart invites readers to return to the delightfully inventive setting of the Night Bizarre with this second anthology of fantastical short stories featuring a magical traveling market that visits any given city only once . . . Together the tales form a sumptuous carnival, offering a tantalizing glimpse into the mystical underworld of plague-ridden Europe. These dark flights of fancy delight.” – Publishers Weekly

The Night Bazaar is a secret marketplace of the rare, strange, occult, and dangerous. Its curious vendors specialize in services or objects which simply cannot be had elsewhere, for any price. This forbidden market has operated throughout history at various locales. It cannot be stumbled upon; you must be Invited. But how did it begin? This collection of thirteen eerie, fantastic, and magical works by various authors recounts the origin story of the Bazaar’s first appearance, in St. Mark’s Square, Venice, in the plague year of 1348. Some take place in those medieval days of fear, witchcraft, pandemic, and murder. Other, more contemporary tales center on objects from that first bazaar – inherited, found, purchased, or stolen during the dark centuries since by the unsuspecting, foolish, and greedy (though seldom the completely innocent). Together the linked stories take readers on a fantastical journey into astonishment, dread, and dark delight.

“With the perception of a poet and the knack of a novelist, Tony Ray Morris joins the ranks of some of the finest crime fiction writers. In turn, part James Lee Burke, Tennessee Williams, and William Faulkner, Deep River Blues will pull you under and have you gasping for breath.” — Craig Johnson, author of the Walt Longmire Mysteries, basis for the Netflix drama Longmire

When the body of a young girl washes up on the shores of the French Broad River, Cord McRae, newly elected sheriff of Acre County, Tennessee, suspects her death might be connected to the Glad Earth Farm, a commune just outside the small town of Falston. Guru/leader Levon Gladson and a group of a hundred and twenty-five followers have moved into an old farm that butts up to the Smokies, and Cord suspects they may be growing something more profitable than sorghum cane up in the hills. The mystery’s complicated by Cord’s investigation into a second recent murder, of an Afghan vet; the growing power of a local “hillbilly” mafia operated by the wily Thorn Reevers; and Cord’s own marriage, which is teetering on the edge of divorce over past violence and his on-again, off-again love affair with liquor. With echoes of WINTER’S BONE and the novels of James Lee Burke, DEEP RIVER BLUES will be a worthwhile addition to the regional crime thriller genre.

On sale now! Available in bookstores and online.

SPECIAL DEAL!  EBOOK REDUCED TO $4.99 US FOR LIMITED TIME ONLY!

IN ANOTHER PLACE,  by Susan Mailer 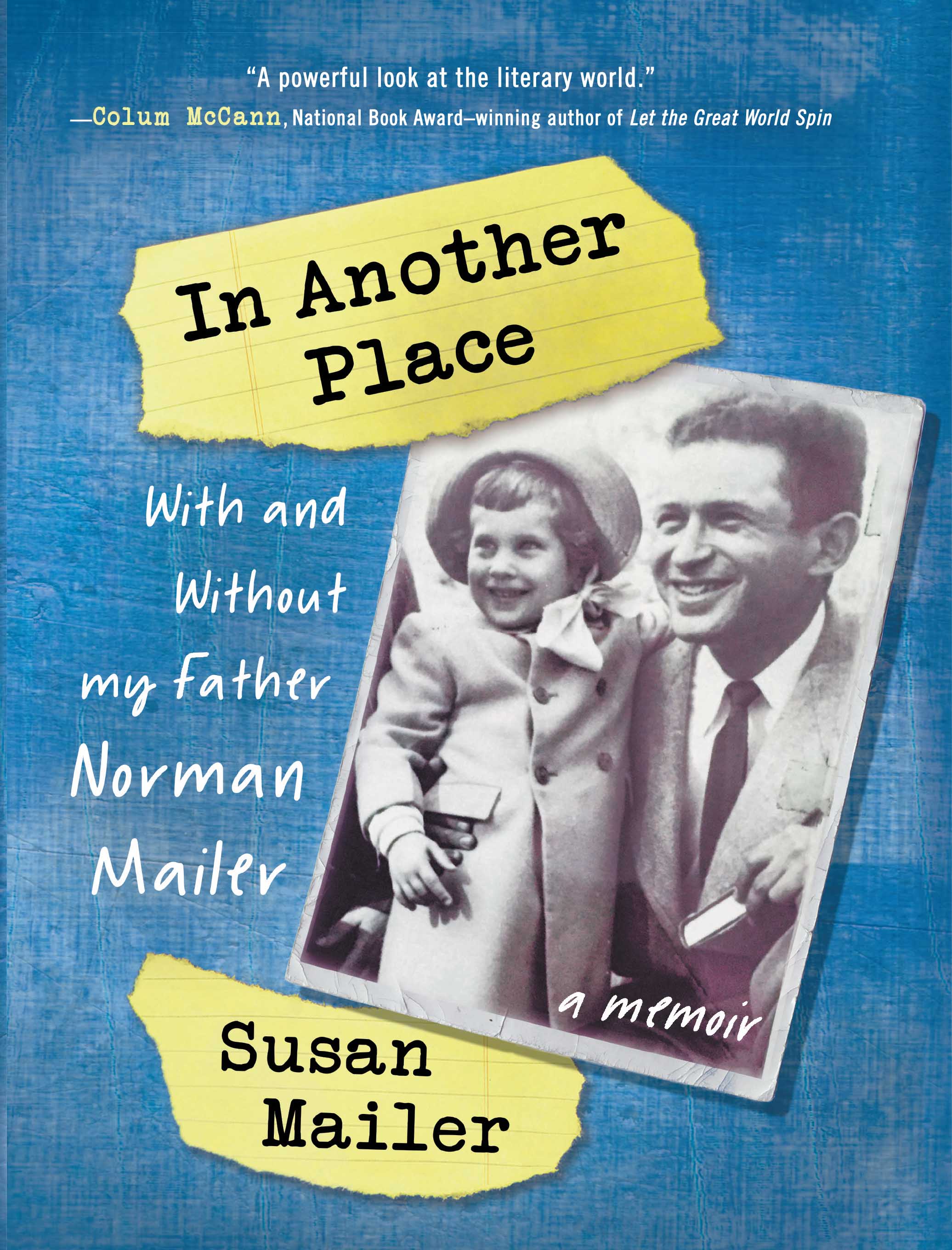 “In Another Place brings us to many remarkable new places in the Mailer universe. Written with tenderness, acuity and unadorned psychological depth, Susan Mailer’s memoir is a powerful look at the literary world.” —Colum McCann, National Book Award–winning author of Let the Great World Spin

“In this beautifully structured memoir Susan writes clearly and honestly about that murky landscape in which we children of these 20th century white male giants live—between adulation and adoration on one end of the spectrum, to the distinctly human, deeply flawed father on the other.” —Kaylie Jones, author of Lies My Mother Never Told Me

Norman Mailer was among the most talented and controversial writers of the 20th Century. The Naked and the Dead (1948), inspired by his experience in World War II, was a bestseller and made him famous at the age of 25. Notoriously combative and egotistical, her father enjoyed a good ﬁght both physically and verbally. Whether cheered or booed, Mailer was front and center in America’s cultural battles for more than 50 years. He married six times and fathered nine children. Susan, born in 1949, is the eldest.
Susan grew up shuttling between her mother’s home in Mexico and her dad’s in New York. Later she would marry a Chilean activist, spending the majority of her adult life in Chile, where she is a psychoanalyst.
In Another Place tells the story of her intense and complex relationship with her father, her ﬁve stepmothers and nine siblings, and the joys and pains of being part of the large Mailer clan. It is a tale of being someone who belongs everywhere and nowhere, always longing for a life . . . In Another Place. 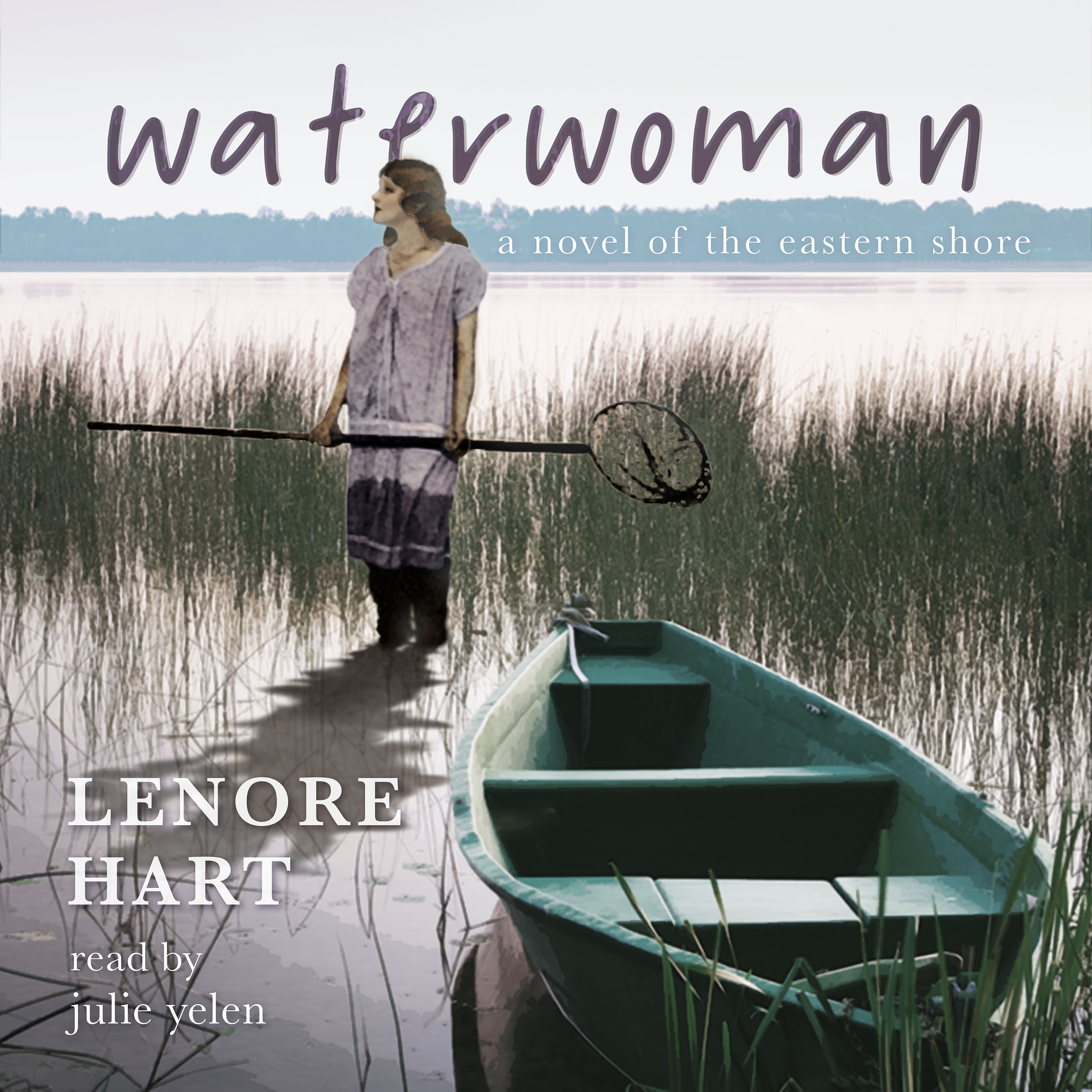 “Pure as the waters of the pre-industrial Chesapeake … utterly convincing and beautifully sensual. You feel the shell cuts, the pull of the nets.” — Baltimore Sun

“A gripping story with an admirable, complex heroine … The love and rivalry between the sisters will strike a chord with teens.” — Booklist

“… Hart creates a believable world where tragedy does not always equal hopelessness, a place where you don’t always get what you want, but if you’re strong, you find reasons to go on living anyway.” — Ft. Lauderdale Sun-Sentinel

Even as a child, plain, boyish Annie Revels had everyone’s role figured out. Everyone’s, that is, except her own. Her sickly mother needed to be taken care of. Her little sister Rebecca was beautiful, where Annie was not. Her father was a waterman, a free-looking life Annie envied and could’ve had, if only she’d been born a son.

Tiny, remote Revels Island, a barrier island off the Eastern Shore, knows nothing of the partying, gin-soaked Roaring Twenties, which grip the rest of the country. The family depends on the coastal waters to make a living, and tragedy is always only a bad storm away. As Annie notes, “In order to live on the Shore, you need to understand that good weather always follows bad.”

But when her father dies, suddenly it falls to Annie to take his place aboard the oyster boat and support what’s left of the family. Out there, she finds the only life she could ever really fit into: being a waterman. Until one day, she meets Nathan…

Now available as an audiobook!  Six entrancing hours for a very reasonable price!  Order it here.