Ignacio in the Dark

“In Dania Ramos’s heart-warming and engaging tale, seventh-grader Ignacio Soto encounters mysteries as large as the universe and a couple that sometimes feel even larger – his friends and family.” – Dan Poblocki, author of the Shadow House series

“Ig” Soto is thrilled when his fellow Seventh Grade Sleuths, Ju and Gunther, join him at the Lenape Environmental Center to explore the night sky at a state-of-the-art astronomical observatory. But the three friends are horrified when the enormous telescope moves eerily, all on its own, endangering dozens of visitors.

Has someone sabotaged it? Has it been possessed? Are spies hacking into the observatory computer? The amateur detectives take on the Case of the Out-of-Control Telescope, as the center’s popular Festival of Matter draws near.

But keeping the clue-hunting under wraps gets sticky when the festival brings some big-shot astrophysicists into town, including one with a close personal connection to Ig. This shocking development will change Ignacio’s life forever, forcing him to question how he perceives the past, and his own place in the universe. 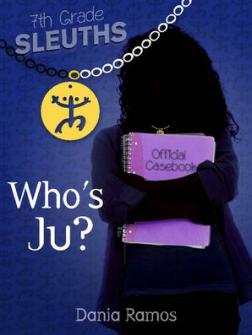 “At a time when the publishing world is in desperate need for more diversity in children’s literature, Ramos has introduced Justina, who is not only full of cultural pride, but is also universally relatable as she struggles with issues all kids face: Who am I and where do I fit in?” — Crystal Velasquez, author of the Your Life, but … series

“This work answers the call for more diverse books for young readers. Fans of Nancy Drew or “39 Clues” (Scholastic) who are looking for something new will enjoy this multilayered tale. VERDICT A diverse mystery novel that goes deeper than the typical whodunit to examine issues of identity and family.” — Patrick Tierney, School Library Journal

Justina ‘Ju’ Feliciano and her seventh-grade sleuths are on the case! A sneaky vandal has damaged scenery from the drama club production and the newbie detectives must catch the culprit before opening night.

But Ju faces a different mystery when a science assignment forces her to investigate the act that her frizzy blonde hair and amber eyes don’t match the shades of brown in her family. This is one case she wishes she didn’t have to solve. Only there’s no escaping the Blueprint of Life Project, even if her mother thinks it’s an invasion of privacy.

Ju’s amateur sleuthing finally leads to the cold hard facts about her past. But even though her life changes forever, she’s still the same mystery-loving girl she’s always been.

Have you ever wished you could go back in time? What if you could alter history, manipulate events and make yourself rich, famous, or powerful? Kristi Connors is too miserable in the present to care about history. Shipped off to boarding school during her parents’ divorce, Kristi wants nothing more than to run home and find her mom and dad together again. In hopes of being kicked out, she enjoys harassing her ill-tempered history teacher, Dr. Xavier Arnold, with endless pranks.

Ty Jordan just wants to be left alone. Sent to GWP after his mom’s sudden death, Ty dreams of disappearing into the pages of the books he reads, far from the bullies who torment him at every turn.

When the unlikely friends find themselves in Dr. Arnold’s detention dungeon, they make a startling discovery … their teacher has invented a working time machine!

The next thing they know, Kristi and Ty are jettisoned back to the Revolutionary War as part of Dr. Arnold’s scheme to change history in favor of his infamous ancestor and the country’s greatest traitor, General

Benedict Arnold. To get home, they must thwart his mad plan while evading slave catchers, surviving battles, and serving as nurses for wounded soldiers. 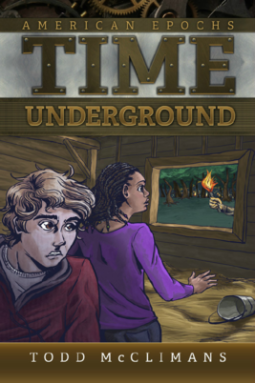 When Kristi Connors and Ty Jordan stole a time machine from their time-meddling sixth grade teacher, they discovered they can alter history. Maybe … for the better?

Ty’s always struggled to understand life in the late eighteenth century. The new United States, fresh off its victory over England in the Revolution, celebrated its freedom with balls, fairs, and crisp, new flags flying from every flagpole. But slavers fly the same flag, and he wonders why that freedom isn’t offered to African-American men and women.

Two hundred thirty years later, Kristi discovers an old family tree. Her ancestors were slaves! Her great-great-grandfather escaped on the Underground Railroad, but lost his younger brother to slave catchers along the way. Can she go back and save him? And how will that change the present, if she does? Travel with Kristi and Ty to the American South in 1858, two years before the slavery question boils over into a bloody war.

Will they save Kristi’s uncle and guide him safely to Canada? Or will Kristi be caught, and condemned to chains? Find out in Time Underground, book two in the American Epochs series.

“Through Ty and Kristi’s experiences, readers struggle through the war, a historic period that is too big to fit on the pages of a history book. Readers begin to see through the eyes of both sides, sympathizing with characters who fight for family, friends, and freedom.” — VOYA Magazine

” . . . isn’t afraid to dive into the grittiness of the period—the political divisions that tear communities apart, the horrors of warfare, and the brutality of contemporary surgical practices—and yet it also manages to remain lively and fun.” — Kirkus Reviews

It’s bad enough Kristi has to share a room at school with her annoying stepsister. She’s also had no news from Ty, her best friend and fellow time-traveler who stayed behind in 1858 after their last trip into the past. He seems to have disappeared from history! Did he continue to work on the Underground Railroad? Become a surgeon? She finally discovers the heartbreaking truth: Ty was killed during the Battle of Antietam. Kristi decides she must return to the past again to save him.

Meanwhile, back in 1862, after a close friend dies from a battlefield wound, Ty volunteers at a hospital in Washington. Given the dirtiest, smelliest, most menial jobs, he works day and night to improve the wretched, filthy conditions there, but the doctors won’t listen. When he’s finally sent to the battlefield, can he avoid the same fate as his friend . . . just one more among the over 700,000 casualties of America’s bloodiest war?

Find out in Time to Heal, Book III in the American Epochs Series, from Overdue Books/Northampton House Press!